One thing that irked me when I was single, and is only marginally improved now as part of a married couple, was the amount of food I threw away because the portions sold in shops is more than what I need. Herbs in particular – a recipe calls for a few leaves of basil, but they’re only sold in bunches. Sure, there are plenty of things I can do – freeze them, dry them, or even feed them to my worms – but you can’t argue with fresh ingredients.

I decided to combat this problem, and chalk up another notch in my quest to live a greener lifestyle, by growing my own. To my great surprise, it turned out to be stupendously easy. Serendipitously, a nearby neighbour put out a bunch of plastic pots for hard trash collection, and I added to that a bag of potting mix and a few seeds, and the next thing you know, I now have a garden! 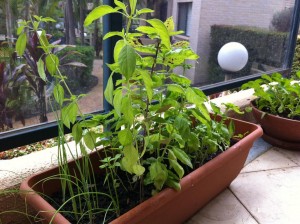 Basil growing in a fancy “self-watering” pot. I’d originally envisaged having several kinds of herbs in that pot, hence the shallots on the left, but the basil grew like crazy and took over. I’ve since moved the shallots elsewhere and hope to get some mint in there. 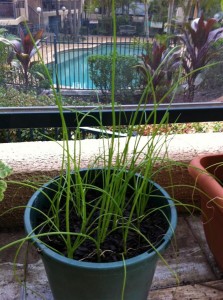 And here are the shallots. Or spring onions. Or green onions. I seriously have no idea. The long green things. I don’t think that they’re ever going to grow to the size of the ones that you seen in the shops (the pot isn’t big enough) but they taste the same. It just means they look more like chives than shallots when you add them to dishes. 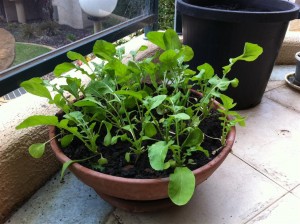 Rocket. This stuff’s great! They grow super quickly and they taste great. This too, was originally growing in the basil pot but got relocated to their own (bigger) pot after I realised their prolific potential. 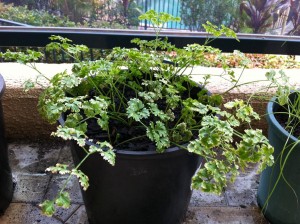 Curled-leaf parsley, looking somewhat unpleasant here ‘coz I’ve let it grow a bit too old. You’re supposed to be able to let parsley go to seed, so that you pretty much have a endless supply. Then again, a new packet of seeds costs like $2.50 from Bunnings… 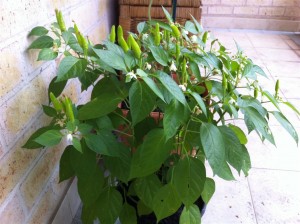 My pride and joy… chillis! Look how many of them there are! They’re not ripe yet, hence why they’re green, but Jenny cut one up to try (you can eat them whenever) and they’re pretty darned hot!

Roma tomatoes. There’s only 4 of them – would’ve been 5 if I didn’t actually knock one off while trying to fix the stake that they’re attached to. These buggers grow tall! I bought this one as a kit from Bunnings for about $30, which includes the pot, potting mix and both Roma and Cherry variety of tomatoes which you alternate planting one season after the other. 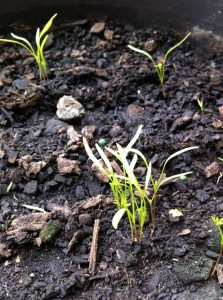 Lastly, the budding start to what I hope will eventually be carrots. Probably a bit too ambitious here trying to grow carrots in pots, but I had a big pot and a lot of potting mix left over.

That’s my herb collection. The garden didn’t stop there – we also have several indoor plants, some flowers which aren’t flowering at the moment so they’re pretty boring to look at, and also these succulents, which are slightly more interesting: 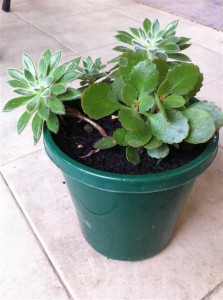 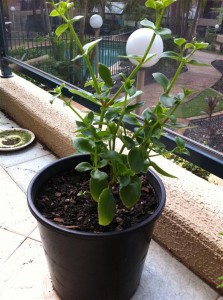 Yay gardening! Have you ever tried growing anything (either successfully or unsuccessfully)?