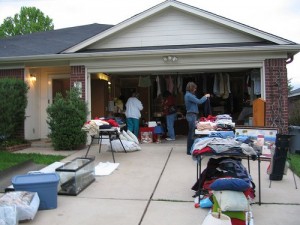 Last weekend, me, my wife and some friends held our very first garage sale. I mean I’d done loads of these before back in Adelaide with my parents, but it was my first time in Sydney. The event would have been much more successful had it not rained and rained and rained on the day! Only a few die-hard bargain hunters came by, but we still managed to take nearly $400, including some deals negotiated both before and after the event.

If you’re thinking about having a garage sale, here are some pointers:

What are some of the things you’ll need to prepare?

And finally, be prepared to haggle! There will be some hard bargainers, so make the decision in advance whether you’re going to play hard ball and live with the possibility that your stuff won’t sell, or be a pushover and get rid of all your stuff cheaply and quickly but live with the regret that you could have earned more.

As for me, it looks like we’ll be having a re-do next weekend when the weather is more amenable. Look for us on Twitter! I’ll be using the same hashtag as the first one, #naidoomarkets.