I’m no eco-warrior but I do give the occasional nod towards being mindful of the environment. Having had my brother visit from interstate recently, I had to do five loads of washing this past weekend. Even though it was mostly sheets, that’s getting into baby territory as far as number of washes go.

I live in an apartment where it’s forbidden to hang washing out on the balcony, but everybody ignores it. If you’ve ever been to Asia or Europe, you’ll have seen good reasons why they came up with the rule in the first place – looking at other peoples’ laundry can be a real eyesore. I try to be as discreet as possible, hanging delicates on the inner lines and towels and sheets on the outside ones so that it doesn’t look so messy.

But when the only alternative is to use an electric dryer, then the debate over aesthetics vs. practicality starts to get a bit hairy. Consider this: the most energy efficient dryer on the market (as rated by Energy Star) uses 128kWh of electricity if used once per week. In Australia, our electricity sources are largely coal-based, which means that each kWh generated results in just under 1kg of CO2. That’s for a machine with a 6-star rating. The one in my laundry? 2 stars (546kWh per year).

Aside from the planet, there’s also my home environment to consider. Drying drastically increases the humidity inside the apartment, exacerbating the problems that I already have with the air quality.

NSW and WA are the only states where there are rules specifically around hanging laundry on balconies, but in NSW at least, that’s possibly about to change. The Department of Fair Trading is about to introduce a change to the law that if passed, will mean environmentally conscious folks everywhere will be able to hang their laundry out on the balcony with a clear conscience.

In case you’re wondering how I dried five loads without using a dryer. Well firstly the fine weather helped immensely – what I put out in the morning was dry by late afternoon, and secondly, I have a Mrs Pegg’s Handy Line which is big enough to hold a couple of loads. I can’t understand how other people use those dinky little rack things. Granted, it did cost me nearly $200 though. 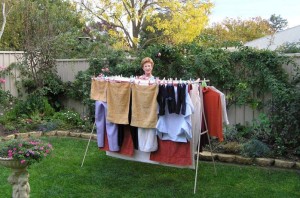 What do you do with your laundry? Do you think this new law will turn Sydney apartments into a visual slum, or is your inner environmentalist jumping for joy?

2 thoughts on “Hanging the “balcony law” out to dry”