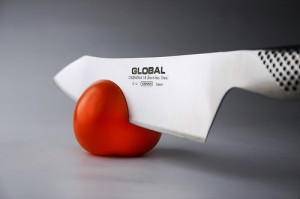 I had a knifing accident the other day – I was attempting to cut an onion using my Global chef’s knife when it slid sideways down the curved surface and took a neat slice out of my finger instead. Without wanting to sound like an infomercial, these knives are renown for their awesome sharpness and one naturally tends to blame the knife for the accident. But if you watch Jamie Oliver or any of the prolific number of cooking shows around, you be familiar with the refrain that it’s blunt knives that hurt people. In my case, if the knife had been sharper it would’ve sliced through the onion, instead of slipping and cutting me.

A quick anecdote: my mum came to visit with us a few weeks ago and cooked for us. She was really impressed with our knives – she commented on how they helped reduce time and effort, but at the same time came away little scared about how dangerous they could potentially be as well.

When she got home she decided to replace her cheap, blunt, ancient jobs. For whatever reason a very young sales boy at the department store decided that it’d be a good idea to take one of the knives out of the box and test the blade with his finger, resulting in a bad gash and loads of blood. After a fair amount of fuss, locating band-aids and whatever, he asked my horrified mother whether she was still interested in buying. The outcome of that expedition should come as no surprise, but it’s incidents like these that put people off having the proper equipment.

Be keen about knife maintenance:

I won’t go into the specifics of knife maintenance; this is just a very rough overview that’s intended to give you an idea on how to approach the task. In theory there’s nothing wrong with those electric sharpening gadgets, which are fine for your average supermarket job, but if you’re investing in an expensive set of knives then you should also be prepared to make the effort to maintain them. As with anything it’s possible to go overboard (especially these days where “advice” from extremophiles can be found all over the Web and on Youtube) – for the average person a 2-step method should be sufficient:

You’ll find no shortage of tutorials on the Web although I found this guy to be generally good value – just don’t let the borderline-psycho-killer potential implied by the collection in the background put you off: